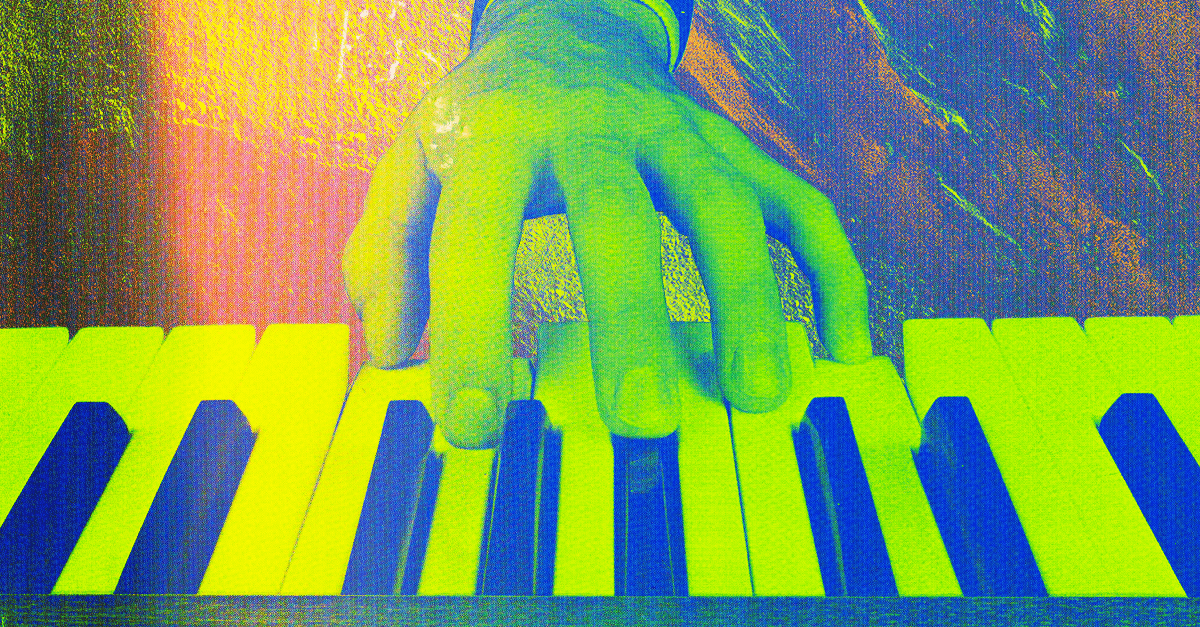 Reading the symbols in a chord progression isn’t easy—especially if it includes Roman numerals.

But knowing how to read this format is important. It’s the key to understanding the function of the chords in a song and it’s an important aspect of music theory.

Simple Roman numerals are easy enough, but you may have gotten stuck on an unfamiliar chord with a strange subscript number stacked up like a fraction.

If that’s the case, you’ll need to learn your chord inversions and figured bass symbols to keep progressing.

In this article I’ll go through everything you need to know to understand chord inversions and figured bass.

What is figured bass?

Figured bass is how chord inversions are written in Roman numeral analysis.

It’s the small subscript numbers you may have seen underneath chord symbols in some sheet music.

But hang on a second. Chord inversions? Roman numeral analysis? This post digs into some of the music theory we haven’t covered yet on the LANDR blog.

Go get a refresher on basics like building chords and Roman numerals in music if you need a better foundation before getting started.

First off, to understand figured bass I’ll have to cover inverted chords.

What are chord inversions?

Inverted chords are chords whose notes appear in a different order than root position.

Inverted chords are chords whose notes appear in a different order than root position.

Here’s how it works. Basic chords are built by stacking triads on top of each other.

The interval relationships between the root and other notes determine the chord quality.

Case closed right? Not quite. Not every single chord is written as blocky snowman with the notes directly on top of each other.

The way it’s written right now, you won’t have only triads to evaluate—yet the chord still contains the same individual notes as your simple C major triad.

And when you listen to the notes played together they still sound out a C major chord.

The chord you’re looking at is an inversion of C major. It’s still C major—but the notes are arranged in a different order.

If you rearrange them, you can rewrite the chord as the familiar basic triad.

Inversions are simply stacked third chords with their notes arranged in different orders.

But changing the order can have a big effect on the sound.

Different notes in the uppermost or lowermost voice can give a basic chord a distinct feel.

Different notes in the uppermost or lowermost voice can give a basic chord a distinct feel.

Triads can be written three ways.

Root position is the familiar snowman style with each third stacked directly on top of the last one.

First inversion begins on the first interval above the root.

Second inversion begins on the second interval above the root.

7th chords with their additional tone can be arranged in yet another inversion—third inversion.

Third inversion begins on the top note of the snowman, otherwise known as the 7th of the chord.

Now that I’ve covered the basics of inversions, I’ll look at those pesky subscript numbers.

Instead, figured bass tells you which inversion a chord is in. The way it works can be confusing.

Look back at a basic triad. Rewritten in first inversion, it looks like this:

Evaluate the intervals of the inverted chord in relation to the bass voice—the lowermost note in the chord.

The note immediately above (the 5th of the chord) is a 3rd above the bass voice. And the top note (the root) is a 6th above the bass.

These are the numbers that appear in the subscript below inverted chords. Figured bass shows the real interval relationships relative to the bass voice of the chord.

Figured bass shows the real interval relationships relative to the bass voice of the chord.

In practice, you don’t need to show every single interval to represent the inversion. In proper figured bass, basic intervals are generally omitted to make the symbols simpler.

Here’s a list of inversions, intervals and the figured bass symbols that represent them.

Inversions with figured bass in practice

All this theory is great on paper, but it’s no use unless you can hear it in context with real music.

I’ll go back to an example from our article on emotional chord progressions.

Some readers were confused by the descending minor progression used in The Beatles “While My Guitar Gently Weeps.”

I’ll break it down:

There are two inversions present in this progression. The second chord in the cycle is written with the figured bass marking 4 2.

If you refer back to the chart, that means it’s a seventh chord written in third inversion.

You can see this in the chord symbol below. The slash indicates that G (the 7th of Amin7) should be played in the lowest voice of the chord.

The next chord is written with the figured bass marking 6. That means it’s a triad in first inversion. Once again, the chord symbol uses a slash to show that the third of the D major chord should be played in the lowest voice.

That’s all it takes to read inversions on a chord chart!

With these key concepts under your belt you’ll find a lot more harmonic possibilities out there to explore!

Michael Hahn is an engineer and producer at Autoland and member of the swirling indie rock trio Slight.